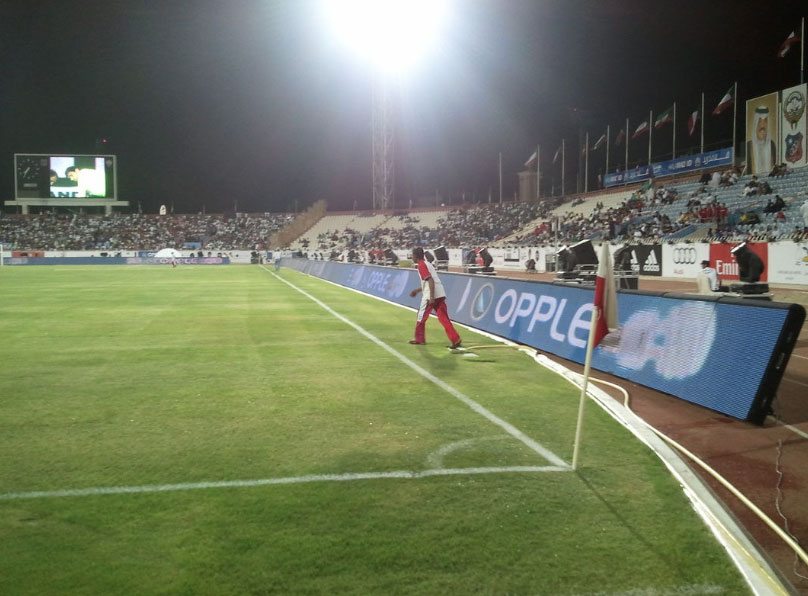 Continuous improvement in living standards gives people more leisure time to enjoy lives and hobbies. Sport is one of the most relaxing and joyful activities, and there is a growing number of sports fans in recent years. Whether an NBA fan or a World Cup fan, they are eager to get a ticket and cheer for their favorite team with other fanatics.

It is thrilling to see the favorite sports teams get a score, and it must always be fun to cheer with the attendance. However, in the past, what people can see was a bunch of heads in front of them in the stadium but the real-time status of events. Nowadays, fanatics can really feel the tension on the field thanks to stadium LED screens.

Furthermore，this stadium LED display can make the Perimeter LED board around the side of the stadium to do advertising as well, bringing the biggest investment income to the business.

In this article, we are going to talk about what the audience thinks about stadium LED screens and what should be considered as the best stadium LED display board.

Out of curiosity, we selected 200 passers-by at random and collected their opinions. Here, we have concluded some of the most favorable viewpoints towards the stadium led screen.

Overall, the LED display board for stadiums does a great favor for the audiences. Most of our respondents said the stadium perimeter LED display screen they were watching at was huge enough so that they were able to see everything that happened in the sports field.

Also, thanks to the real-time transmission technology, the stadium LED screen allowed the audience to grasp every important and splendid moment. As football fans are all obsessed with scores, a huge stadium perimeter LED display screen could satisfy their needs.

However, the interviewees spoke of some aspects that bothered them. First of all, the stadium LED screen is large enough but less in clarity. “I can’t even see some of the fonts clearly. I guess it is just getting old.” one of the respondents said.

The second one is of low brightness. Because the whole stadium is full of lights, it is always bright. While sometimes, it won’t make the audience think that there is a display screen because of the low brightness.

The third is about fluency and noise. Some interviewees complained that when they sat close to the stadium perimeter LED display screen, they were affected by the sudden noise. Some viewers who sit a little farther away from the stadium LED screen complain that it is depressed that the picture suddenly slows down, making them unable to keep up with the audience in the front row.

What Should Be the Best Stadium LED Display Screen

After collecting all the opinions from these audiences, we did a little research about what kind of stadium LED display screen is the best one and can bring more cracking games to your stadium.

Besides, since the stadium LED screen is also used for advertising, smooth picture can ensure the continuous broadcast of the advertising picture, which is the greatest respect for the advertising sponsors.

There is no doubt that wonderful scenes, slow motion playback, and close-up shots can bring the audience a perfect visual feast; the broadcast of commercial advertisements can make the scene more competitive and shocking.

The stadium LED screen is one of RIGARD’S star products. It has adjustable back brackets that allow for a leaning angle to achieve a wider viewing angle. Furthermore, equipped with a soft mask and soft pillow, it prevents players from hurt when hitting on the screen.

A wonderful game deserves a LED display screen. If you are considering getting one, don’t hesitate to contact RIGARD.