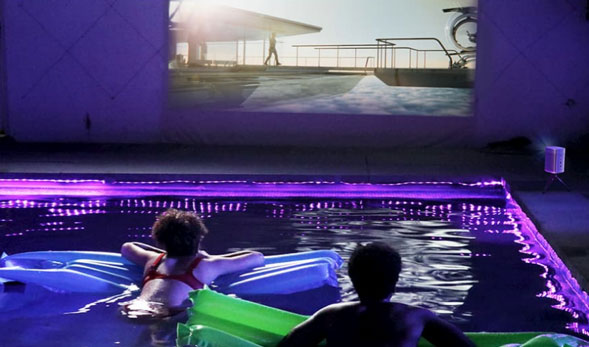 The emergence of the internet and electronic products have significantly enhanced our living standard. Smart portable projectors, as an example, is the high-tech to influence our visual entertaining life. Most people enjoying visual enjoyment have equipped themselves with such devices. If you would like to know more details about purchasing one, this article would be worth reading.

When we buy Android portable projectors, we are actually purchasing the user experience in the next 5 to 10 years, so before we decide to install projection, we need to understand these two questions:

Do you want a TV if you have a projector?

If it’s for your own use and you don’t have the habit of watching TV every day, install a projector. When you watch it, put down the curtain. If you don’t watch it, this place could be your private study and gallery.

Is the projector used frequently?

If you just want to have a movie night once in a while or use a projector when there is a game, you can choose a portable intelligent projector.

It uses a telephoto lens, which can be cast in bedrooms, dormitories, and even tents. When not in use, it’s convenient to store it in a cabinet. It’s suitable for families that have been decorated or have low requirements for projection quality.

Where to put the projector?

If you don’t want to destroy the space style, you can use the ceiling or cabinet for packaging the projector, which looks a bit chaotic.

The more extreme owner will install an automatic lifting frame in the ceiling, which will not affect the overall style of the room at all; that is, it will be relatively troublesome when the machine needs to be manually debugged. You can also use the wall to make a niche for the projector. If you turn it up, it’s a picture. If you turn it down, it’s the projector.

The exposed style is the most simple and direct one. It can be placed on the table, stand on the shelf, or even hang on the ceiling. It is more convenient for debugging, such as Nordic style, industrial style, and minimalist style.

When buying a projector, you often hear the merchants emphasize lumen, which is the unit of illumination. High brightness means that the picture is clearer and more abundant, but to avoid dazzling, the higher the projection brightness is, the better.

1/More than 1000 lumens are only suitable for viewing in a dark room;

2/Over 2000 lumens can be seen in the daytime, but the resolution is not high, turn off the lights, and the effect is similar to that of the cinema;

Therefore, it is suggested that we choose a projector of 2000 lumens in our family.

Resolution is also the hard index of the projector. At present, the mainstream of home projector is 720p and 1080p. The image quality is clear, and only when it is put out can it feel like a professional cinema. The best display ratio is 16:9, with a broad vision. At present, most TV programs and movies are 16:9.

In the end, we would give a conclusion:

1. for the ordinary home projector, try to buy a projector with a brightness of more than 2000 lumens and a resolution of about 1080p;

2. Choose a suitable projection ratio according to your room distance and the desired projection size;

3. The problem of wiring and socket must be considered in advance for the family in the decoration stage or planning to be decorated;

4. For those that have been refurbished and have not high requirements for image quality, it is recommended to choose a portable intelligent projector, which can be done in two or three thousand yuan.

If you would like to purchase a smart portable projector, XGIMI, as a famous manufacturer adept at Android portable projector, is highly recommended. For it could reach high performance on all the parameter mentioned above and provide you with a satisfactory visual experience. Don’t hesitate to set out on your enjoyable visual journey.