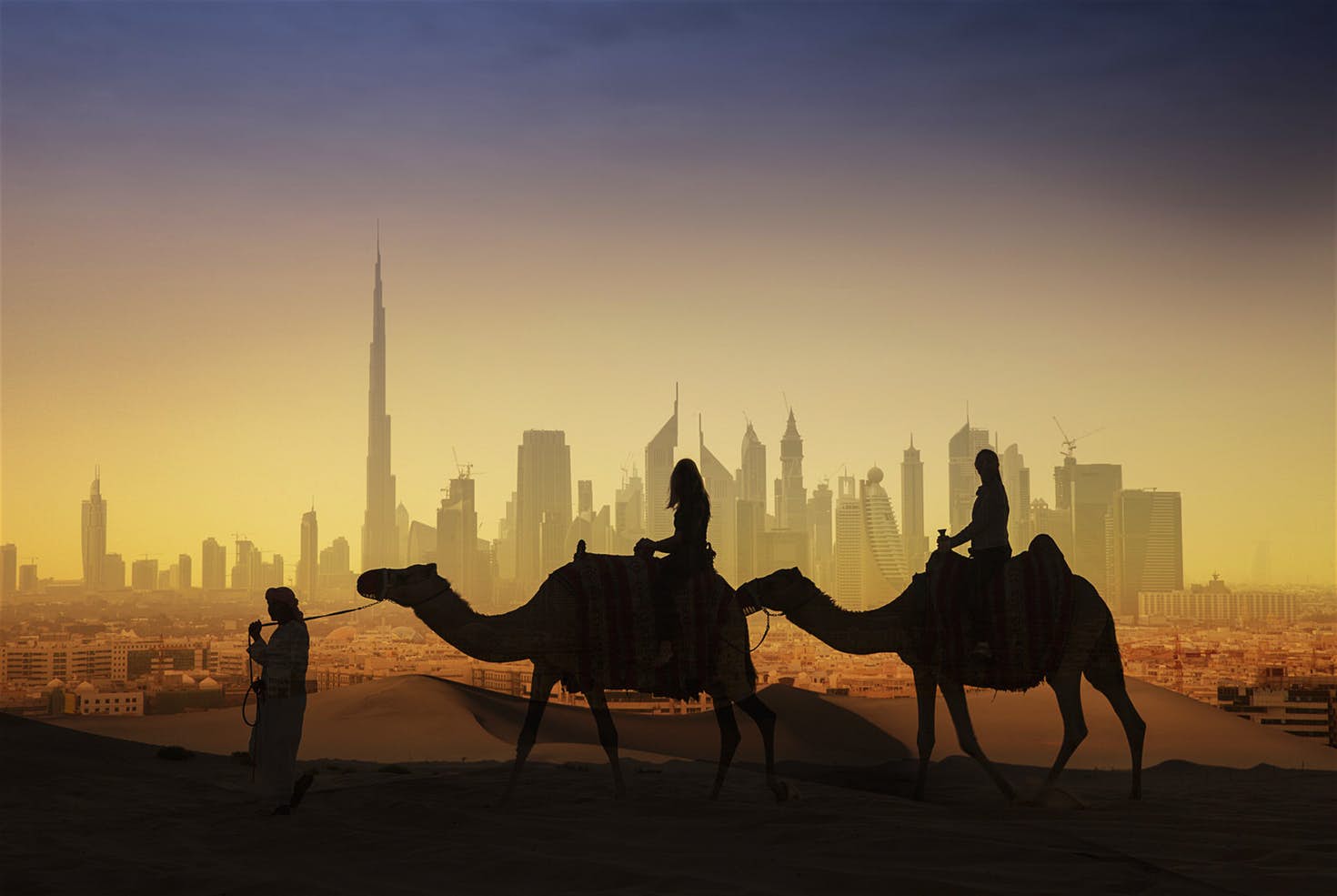 Dubai is the biggest and most populous of the cities in the United Arab Emirates. Capital of the Emirate of Dubai, the country faced a problem. Like many Arab nations, Dubai got rich on oil, but their reserves are limited and their oil cash flow won’t last forever.

Their solution? To become a global city on steroids. The following are the 40 craziest things you’ll only find in this amazing city.

Since Dubai is small at only, 588 square miles, it obviously needs more land to fit the wealthy who flock in. But who wants a view of the desert? That’s why they built more land, giving residents their own personal beachfront at what’s called the Palm Jumeirah since the whole thing looks like one.

According to Numbeo.com, a website that monitors the Crime Index Rate of different cities, Dubai has one of the lowest crime rates in the world. Of the 288 cities ranked according to crime statistics, Dubai stands at 279th place.

His Highness, Sheikh Mohammed bin Rashid Al Maktoum, Sheik Mo, for short, has a simple motto for his country, build, build, build. So they did just that.

There’s the Burj Khalifa, the tallest building in the world at 2,717 feet with 160 floors.

The Cayan Tower at least 1,004 feet, designed by the very people who thought up the Burj Khalifa.

The Burj Al Arab Hotel, the world’s only 7-Star hotel because it’s just so luxurious. All guests are picked up by a Rolls Royce. Insane bedrooms. Want to know what a room in the Burj al Arab looks like? Only $24,000 a night, during the offseason, that is. But it does come with a personal butler available 24/7.

Need gold? Then head on over to the Emirates Palace Hotel and make your way to the gold-plated ATM machine.

Stick your money, credit or debit card in and then choose from up to 320 gold products, from gold bars to gold coins in varying weights and purity.

Dubai was the first to host Gold to Go ATMs by TG Gold-Super-Markt. As of 2018, there are now 50 all over the world.

Like all deserts, Dubai is extremely hot. For those who can’t afford to stand in line at the gold ATM, and instead stand outside waiting for buses in the burning sun, the city’s got them covered with air-conditioned bus stops.

Biggest Mall in the world

The Dubai Mall is the biggest mall in the world by total area and hosts some 1,000 retailers. In 2011, it became the most visited in the world because it’s also home to the Dubai Aquarium and Discovery Center. In 2012 alone, it hosted over 65 million visitors. To put that into perspective, New York City saw 52 million tourists in the same year.

Not to be outdone is the Mall of the Emirates, which hosts Ski Dubai. As its name suggests, you can ski in it. It includes an 85-meter-high mountain with five slopes and a 400-meter long run, complete with ski lift, and even a few real-life penguins, all to help you forget the desert outside.

In 2013, the city decided to host the 2020 EXPO and to make sure everyone got the message, it held a Luxury Car parade. How many joined? Over 500 private owners who were more than happy to show off their luxury and super luxury cars and motorcycles.

Luxury cars aside, Dubai hasn’t forgotten its ancient roots, which includes a reverence of camels, a traditional means of transport, food, and even currency. It, therefore, hosts a camel festival and camel races complete with cash prizes. When not walking their camels, they even have spaces to park them in.

If you have money to burn and want to make Dubai home, there’s the Reserve at Al Barari, a mere 0-minute drive out of the city. Mansions on offer include this 50,000 square feet villa, complete with a pool, six bedrooms, and a four-car garage. How’s about a bathroom the size of most people’s homes complete with a skylight?

Like all desert cultures, Dubai has a thing about water, hence the Dubai Aquarium & Underwater Zoo in the Dubai Mall. Among the largest suspended aquariums in the world, it holds 10-million liters of water and is home to over 140 species.

If you’d rather enjoy aquariums at your hotel, stay at the Atlantis The Palm, which sports a water park and even has aquariums in the restaurant lobby and some rooms.

The largest flower garden in the world was opened in 2013, putting the Dutch to shame. Over 150 million flowers call this garden home, compared to the 7 million in the Keukenhof in the Netherlands.

But it’s no ordinary garden, as it’s made up of flower sculptures which include a replica of the Burj Khalifa.

Some suggest this picture of a Dubai resident riding on a lion is fake. Given this video of another who keeps a tame lion, however, I believe it’s entirely possible that lions could make a good mode of transport when the oil finally runs out.

Falcons are a symbol of the United Arab Emirates, which allow them to fly… on board their planes, that is. And if you don’t believe me, just take a look at this. Here’s another example. It is understood they are often transported to take part in hunts, with the birds allocated a seat and placed on clothes to avoid any accidents.

There’s no sin in driving a relatively cheaper car like an SUV in Dubai… so long as you gold wrap it, that is.

Sadly, that’s too much gold for many, so the Dubai airport kindly sells gold phones for $43,189. The Burj al Arab also provides guests with 24-karat gold iPads to maximize their stay. For those who can’t bear to part with them upon departure, they even sell them for over  10,200!

If you’re desperate for a gold fix, you might enjoy the Bloomsbury’s Golden Phoenix Cupcake, covered with 23-carat gold sheets! Yours for only  1,007!

If you find gold too tacky, there’s the 8-wheeled car you can burn your money on and the double lane vehicle for a big family of plus sizes.

Not everyone’s been lucky in Dubai, however, and since it’s a crime to be in debt, some flee… after ditching their luxury cars at the Dubai airport.

Good luck getting away from Dubai’s police since they can easily catch you. Cars in their fleet include Bugatti Veyron, Bentley Continentals, Mercedes SLS AMGs and Lamborghinis.

Seeing that it’s almost impossible to outrun the police on the roads, you might opt to escape on water. But that’s also a terrible idea, thanks to their superfast X Cat class rescue boat, capable of zooming at 85 nautical miles.

In Dubai, going camping means hopping into a 40-foot-long eleMMent Palazzo expandable double-decker motor home, complete with gold-plated interiors, cocktail lounge, and a 40-inch flat screen TV. And all this for a mere $3 million.

For simpler and safer pleasures, there’s the Dubai Paddle Surfing competition; but you have to wear the Kandoura, the national outfit.

Tennis in the air

It only happened once in 2005, but Andre Agassi and Roger Federer were invited to play tennis on the Burj al Arab’s helipad, over 692 feet up in the air. Notice the lack of a safety net around the court? Good luck retrieving the balls.

This can arguably be found in the Ibn Battuta Mall, a culturally-themed shopping center displaying traditional Chinese, Arab, and Indian architecture and decor. You can find Starbucks in the Persia Court, which looks amazing.

Many places in Dubai offer free water, but some take it a step further by giving free food, including this stand from Govinda’s restaurant. This Kindness Fridge initiative in Dubai plays a meaningful role in the community and extends its mission of health and happiness to all to those in need.

Because Dubai loves its camels but is a modern country, they’ve gone into robotics. Not to replace camels, mind you, but to replace the use of child jockeys, who were mostly slaves, which was an ancient tradition that was only banned in 2005. The robots are extremely useful in keeping the weight down and they whip the camel to make it go faster.

Wheelies are nothing new, but standing on cars doing them isn’t exactly traditional. The clothes are very traditional, though.

Drifting 200 kilometers an hour through traffic

Why drive in the same direction as others when you can give them a heart attack by spinning around and driving toward them? This particular driver, notoriously known as King Al-Nazeem among his friends for his daredevil stunts in cars, reportedly lost his life while drifting on a highway like this. Take note, don’t drive stupidly like this!

Fortunately, sane heads eventually prevail. Which is why that guy in the previous video was given 1,000 lashes with a cane, sent to jail for 10 years, and banned from driving for life. If you think that was harsh, think again. He was actually very lucky because prosecutors wanted the death penalty.

This is an ancient tradition from Dubai that goes back thousands of years… actually, it isn’t. This is what happens when you have so much money that you don’t know what to do with it.

So that nicely sums up Dubai. Have you Ever been there? And did it match up with the examples in the article? If so then let me know in the comments section down below.